Power system modeling is a difficult task for engineers trying to build computer models to closely simulate the actual, physical power grid. Yet, power system models are the key to accurate power grid monitoring and analysis. If certain aspects of the model are inaccurate, this will be further reflected in the analysis.

BSI has a suite of modeling tools to identify errors in power system models and the ability to calibrate and fine tune the parameters.

Model inadequacy detection will verify the adequacy of the current model in describing system dynamic behaviors. The engine will simulate model outputs and compare the model outputs with the field measurements.

Model parameter calibration takes places after errors are identified. This procedure involves the tuning of model parameters so that the model’s simulation outputs match the measured system responses.

NERC Mod 033-01 Steady-State and Dynamic System Model Validation standard requirements and compliance procedures showcase the importance and need for accurate models and parameter data. This can be achieved by performing model validation and calibration studies.


The BSI Parameter Error Identification and Correction (PEIC) tool is used to detect model inadequacy and improve model accuracy for power transmission systems using on-line measurement data. First, the tool will identify suspicious parameters that are found throughout multiple measurement scans and then calibrate to ultimately correct these parameters.


Input data needed include SCADA data and/or PMU measurement data and network topology. Other measurement devices can also be used.

Identify possible errors in the network topology at a given state or snapshot of the system with the BSI Network Topology Error Identification and Characterization (NICHE) tool.


BSI’s NICHE software for correcting network topology errors will support daily operations. The tool is a standalone tool that automatically interfaces with other data sources and can export key data to be used by engineers and operators.

BSI has an extensive portfolio in PMU-based applications:

Renewable energy plays an important role in reducing greenhouse gas emissions; thus, it has become a target goal across the world to increase renewable energy sources. However, renewable energy integration causes stresses on the system that have not previously been considered.

Accurately forecasting power network quantities, such as loads and renewable energy, significantly impacts the economical and reliable operation for industrial users and utilities. BSI's proprietary ELITE forecasting technology is an innovative and flexible framework for constructing high-quality ensembles of learning models. Based on this framework, BSI has developed a set of forecasting tools to meet power industry requirements. Artificial intelligence and machine learning are used to further improve upon accuracy.

DEPENDENCE MODELING & UNCERTAINTY QUANTIFICATION seeks to characterize the association between variables through joint distribution and create scenarios through sampling technology. It is the science of quantitative characterization and reduction of uncertainties in both computational and real-world applications that aims to determine how likely certain outcomes are if some aspects of the system are not exactly known. To quantify and represent the uncertainty, a common approach is to generate a set of points by certain sampling techniques to characterize the error distribution.

The software tool performs dependence (of each renewable energy site) modeling through a copula-based method. Uncertainty quantification is then performed using the Latin hypercube-based method to generate samples. The program generates a distribution of errors that characterize the data through historical information. The final scenario develops a scenario list of possible renewable generation forecasts. This scenario can be used for a variety of applications. One example is to develop a contingency list of possible renewable energy generation scenarios for contingency analysis.

DEPENDENCE MEASUREMENT & CORRELATION looks to quantify the association between random variables and generate some easily computable indices to measure the strength of the dependence from observed data sets.

This module is used for dependence measurement and correlation calculation between two sets of data.

RAMP DETECTION & ENVELOPE GENERATION provides a means to visualize and quantify ramping actions observed in data and generate error distribution envelopes to characterize uncertainty. Another function of the module is to generate an envelope of expected forecast distribution based on the historical forecast errors for the data set. This envelop can be used to visualize and use information on the worst-case scenarios for the data set 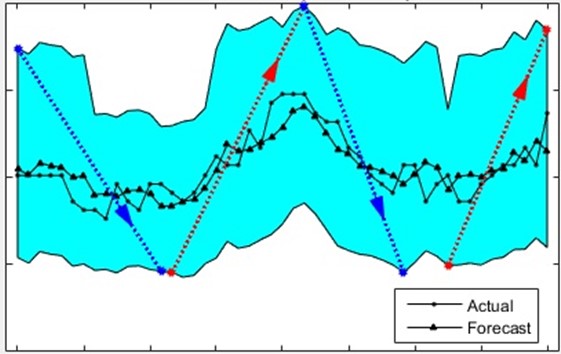 The data used for this simulation is the historical forecast errors for the data set being analyzed.

It is estimated that utilities spend millions of dollars every year to send service personnel out into the field to visually inspect electric power lines and equipment.

Bigwood Systems has developed an artificial intelligence-based platform that can identify issues in real-time using video and images taken by drones. This advanced image recognition technology is tailored specifically for electric power grids to reduce greenhouse gas emissions (reducing cars and helicopters needed to survey assets) and save money for utilities.

Some examples include identifying: